I had another good month of reading in May. I’m on a roll for 2017! If I were a faster reader, I could devour more books. In the meantime, though, I’ll enjoy as many as I can.

I’m running out of superlatives for the books I’ve read this year. I kept hearing about A Man Called Ove, by Fredrik Backman, so I got on the waitlist for it at the public library. It’s a popular book, so it took a while for my name to gravitate to the top of the list.

I thoroughly enjoyed this book. At times outrageously funny and at times heartwarming and touching, it held my interest from start to finish. Ove is a 59-year-old man. I could see my father, my brother, and even myself in him. I could see myself in his late wife when he recalled how it drove him up the wall because she delighted in planning the details of a trip to the extreme. That’s me! Thank goodness I have a sense of humor! Poor Ove is at odds with the world and having trouble keeping up with the modern world. For the most part, he’s not even trying to keep up.

The author, Fredrik Backman, is from Sweden, where his books have gained much acclaim. I am amazed at how well the humor in this book translated so well from Swedish into English. Although I don’t speak or read Swedish, I don’t believe the book lost anything in the translation. I look forward to reading Mr. Backman’s other books.

Maybe it’s because Mother’s Day was approaching when I was reading this book, or maybe the sentence would have struck me like a ton of bricks any time of the year. Ms. Picoult has an uncommon gift when it comes to writing. Her books tackle some of the most heart-wrenching issues of our day, and she has a wonderful way with words.

I featured the following sentence in my Being the Balloon blog post on May 5, 2017:

“What it’s like to be the balloon, when someone lets go of the string.”   – from Small Great Things, by Jodi Picoult

The context of that sentence is that Ruth, the protagonist who is a seasoned labor and delivery nurse, a mother, and the widow of an American soldier killed in Afghanistan, reacts to the death of her mother with, “What it’s like to be the balloon, when someone lets go of the string.”

I highly recommend Small Great Things. In it, Ms. Picoult takes on the issue of race in America, and she has an uncanny talent for getting inside the skin of individuals from one end of that spectrum to the other in Small Great Things. The line that I focused on from the book in my blog on May 5 speaks to the humanity of us all.

In a nutshell, Small Great Things is about an African-American nurse in Connecticut who is barred from caring for the newborn infant of a white supremacist couple. Author Jodi Picoult masterfully writes from the point-of-view of the nurse, the white-supremacist father, and the white lawyer who defends the nurse. There is an explosive trial during which all kinds of raw emotions erupt. I think we all can learn some life lessons by reading and pondering Small Great Things, by Jodi Picoult!

The Hidden Life of Trees, by Peter Wohlleben

I kept hearing good things about this book, which had been translated into English from its original German. I finally got it from the public library, but with too many other books to read and a lot I was trying to learn about the craft or writing. Therefore, I only got 40% of the book read before I had to return it to the library for the next person on the wait list. I will definitely check it out again so I can finish it.

The Hidden Life of Trees:  How They Feel, How They Communicate – Discoveries from a Secret World might not appeal to everyone, but I thought it was very interesting. That might be because I grew up and again live out in the country. My parents instilled an appreciation and respect for trees in us. We have a variety of trees in our yard – dogwood, pine, ash, poplar, cedar, several varieties of oak, mulberry, sycamore, black walnut, sweet gum, holly, persimmon, and maple.

I thought I knew a lot about trees until I started reading Peter Wohlleben’s book. I now know that there’s a whole world out there I can’t see or hear. The book explains how certain tree species work together and how other tree species work against one another. It talks about how trees pump water out of the ground. It talks a lot about fungi and how fungal networks underground help trees in numerous ways. It really is quite fascinating!

The Nightingale, by Kristin Hannah

I highly recommend The Nightingale, by Kristin Hannah. It is a historical novel about two sisters in France during the German occupation in World War II. The sisters cope with the occupation and resulting cruelties of war very differently. 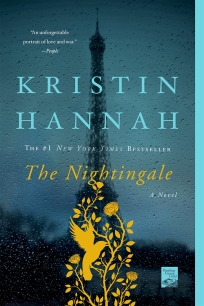 One sister joins the French Resistance and risks her life helping shot down Allied airmen across the Pyrennes and into Spain. The other sister’s nerves and wits are pushed to the limits as two German officers are billeted in her home. The book was inspired by a 19-year-old Belgian woman, Andrée De Jongh, who created an escape route out of Nazi-occupied France.

This book will pull on all your emotions. When the characters are cold and hungry – which was most of the time – you will feel cold and hungry, although I’m certain that I truly can’t imagine the level of hunger or fear the people who lived through the ordeal actually endured.

When we study World War II or hear stories about it, the emphasis is almost always on the battles. The Nightingale gives a paints a picture of life on the home front in France. It was this month’s book for discussion by Rocky River Readers Book Club. Everyone at our meeting had only praise for the book – how much it taught us and how well-written it was.

This historical novel is Yaa Gyasi’s debut as a fiction writer. It is different from any novel I’ve ever read. It is set in Africa. As part of my 2017 Reading Challenge I wanted to read a book set on each of the continents this year, so I was drawn to this novel. Unfortunately, I couldn’t finish reading it before it was due at the public library.

Each chapter is about a different member of this family. It is about family ties and the horrible conditions in the slave trade. It puts a human face on slavery – a subject we tend to think of in terms of numbers and not the families that were torn apart in Africa. If I get a chance, I’d like to check this book out again.

The Tea Girl of Hummingbird Lane, by Lisa See

Like Homegoing and The Hidden Life of Trees, I didn’t get to finish reading The Tea Girl of Hummingbird Lane before it had to be returned to the library. I couldn’t renew any of the three books because there were people on the wait list. The part of The Tea Girl of Hummingbird Lane that I got read was fascinating in how it shed light on some of the superstitions held by the Chinese. I had no idea!

The novel follows a young Chinese girl who is painfully aware from birth that she is not valued because she is female. Her family has to walk for hours to pick tea leaves for a meager amount of income. It is a difficult life. Her mother is the local midwife and she tells her daughter that she must follow in her footsteps in that occupation.

There is a ray of hope, though, because the girl’s teacher tells her that she can leave the harsh mountain environment and make something of herself. I look forward to checking the book out again in order to see how her life turns out!

I hope you have a good book to read. I have come to the conclusion this week that I am trying to read too many books and not spending enough time on my writing. My goal in June is to strike a happy medium.

If you’re a writer, I hope you have productive writing time. I’m writing bios of my characters in the “new and improved” The Spanish Coin.

10 thoughts on “You Need to Read These Books!”