This is the eighth day of the 2017 A to Z Blog Challenge, so I am writing a blog post that has something to do with the letter, “H.” I chose a topic I enjoy and one about which I try to learn more every day.

One of my dreams is to write a historical novel. The historian in me struggles with the fiction in historical fiction. The writer in me wishes I could run fast and loose with the facts.

Over the weekend, I did a lot of reading on the subject in preparation for writing today’s blog post. In the process, I found some information that shed more light on the historical event that serves as the basis for the novel manuscript I’ve been working on for the last decade or so.

When I mapped out my topics for this A to Z Blog Challenge two or three weeks ago, I thought “H” was a no-brainer. I could write about historical fiction. Today’s post would be one of the easier ones of the 26 letters of the alphabet. That’s laughable now, except I don’t feel much like laughing.

I won’t see The Spanish Coin in print. Not in its present form. Probably not in any form or with that title. I will, however, be able to use parts of it and characters from it.

None of my research has been in vain. Nor has any of my writing. Any time spent writing is beneficial. Writing is an exercise of “muscles” in the brain. Like any other muscles in the body, if not used they weaken and eventually cease to work.

I’m certainly not the first writer who never got her first novel published. There are numerous stories about first manuscripts being lost. Some succumbed to fire, while others were mistakenly left on a train and were never seen again. Many first manuscripts get rejected so many times by publishers that the writer eventually puts it away and moves on to another novel. Most writers have had to start over. That is what I will do, and I believe the end product will be better than The Spanish Coin manuscript.

History contains many errors because each person sees the same incident differently or remembers it differently. History textbooks contain errors and are biased depending on the agenda of the writer(s), the publisher, or the state school board or local school’s decision makers selecting the curriculum. History books are usually written by someone on the winning side of a war. The viewpoint of the losing side is rarely given or, if it is, it is what the winner thinks the loser thought or believed.

James Alexander Thom quotes author Lucia Robson in his book, The Art and Craft of Writing Historical Fiction as he wrote the following:

“Lucia Robson’s facts can be trusted if, say, you’re a teacher assigning her novels as supplemental reading in a history class. ‘Researching as meticulously as a historian is not an obligation but a necessity,’ she tells me. ‘But I research differently from most historians. I’m look for details of daily life of the period that might not be important to someone tightly focused on certain events and individuals. Novelists do take conscious liberties by depicting not only what people did but trying to explain why they did it.’” 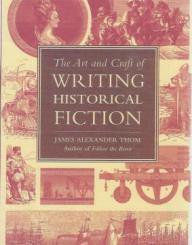 “To be really good historical novelists, though (and that’s what I want us to be), we have to take our obligation to historical truth just as seriously as the historians do theirs.”

“But here’s the key:  Whether your historical story is ancient or recent history, what you want to do is re-create it in full – live, colorful, smelly, noisy, savory, painful, repugnant, scary, all the ways it actually was – and then set the reader down smack in the midst of it.”

If I’m going to write historical fiction, this is my challenge: Get all the facts right, as far as research makes that possible, and flavor the story with believable dialogue and enough authentic background to make my reader feel like he or she is there.

The story I want to write takes place in the Carolina backcountry in 1771. In order to take my reader there, I must go there. I must be there.

Please hang in there with me. I’ve always thought of my blog as a way to take readers along on my journey as a writer. The road is not straight. It contains many curves, hill, and potholes. Yesterday I ran up on an unexpected detour.

As a traveler, I don’t like detours. I’m the type person who drives other people crazy. I map out the entire trip in advance. I have a daily itinerary planned. I leave little time for serendipity. That’s the way I plan vacations and yet, when I look back on the best trips of my life, it is the ones that weren’t so rigidly planned that I enjoyed the most.

Fasten your seatbelts, because this writer’s journey just got a lot more exciting and uncertain!

2 thoughts on “H is for Historical Fiction”